(A long discussion of animal communication can be found in my book.)

In the last 40 years, there have been many apes that have been taught to communicate with humans using sign language or other means, but the most famous among them are Koko the gorilla, Washoe the chimpanzee, and Kanzi the bonobo. These are their stories.

Koko was born in the San Francisco zoo on the fourth of July, 1971. Her name is a shortened form of Hanabiko, which is Japanese for “fireworks child,” a reference to her birthday. Penny Patterson began working with her almost immediately, originally as part of her doctoral thesis, and still works with her some 44 years later. She began with an intensive training program, teaching Koko to recognize both spoken English words and ASL-based sign language. Koko then graduated into making the signs herself. Patterson reports that Koko uses more than 1,000 different signs and can recognize more than 2,000 spoken words.

There is a vigorous debate among scientists in the fields of ethology, primatology, psychology, and linguistics regarding what Koko’s use of signs really means. Many scientists feel that this is nothing more than extensive operant conditioning, that Koko uses the signs to get rewards and has no sense that the signs mean anything to her per se. By Patterson’s own reports, it is clear that Koko frequently makes signs in rapid succession without any coherent meaning, while trying to please whoever is watching. There is also extensive worry about the “Clever Hans” effect. A summary of the critical analyses of Patterson’s claims can be found here.

Nevertheless, there are some indications that Koko has some understanding about the communicative function of the signs. For example, Koko has invented novel signs by combining other signs. For example, when she saw a ring on the finger of Dr. Patterson, but had not been taught the word for “ring,” she called it a “finger bracelet.” She did the same for mask (eye hat) and brush (scratch comb). It is difficult to explain her doing this if the signs didn’t connect with the concepts in her brain.

Koko also spontaneously expresses herself in enlightening ways. When her pet cat ventured out of the facility and was killed by a car, Koko repeatedly signed “cry,” “bad,” “frown,” and “sad.” That is not reminiscent of conditioning, but of an attempt to express her emotional state. (The story of Koko and her pets is fascinating and can be found here.) Koko also recognizes herself in the mirror, something most gorillas don’t do, and makes comments about herself and her appearance. If this is operant conditioning, it sure disguises itself well as linguistic expression. 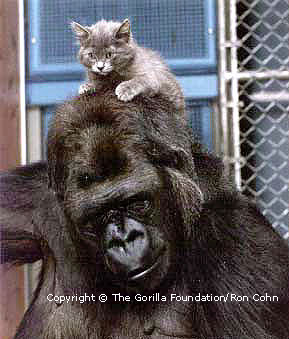 A chimpanzee named Washoe began using signs even before Koko. Allen and Beatrix Gardner “adopted” Washoe when he was two years old and for three years, they raised him as they would a deaf human child. They lived together 24/7 and communicated using only ASL. They did not intensively “train” Washoe on the signs using repetition and reward, but rather used them in their normal functional context, as human parents teach their children language simply by using it with them. The hypothesis was that, if chimpanzees have a natural instinct to learn and use gestures, Washoe would pick up the signs herself.

And pick them up she did. The Gardners and subsequent researchers found that she successfully mastered 350 different ASL signs. They employed a rigorous system to document this skill involving double-blind scoring (to eliminate the Clever Hans effect and confirmation bias) and requirements that a given sign be used spontaneously (not as a result of prompts), appropriately, and in correct context every day for at least 14 days.

Chimpanzees are generally considered to be more intelligent than Gorillas, so the fact that Washoe learned only 350 signs while Koko has learned over 1,000 may seem surprising. However, it is important to remember that Koko was intensively trained, while Washoe was taught only through modeling. Secondly, Patterson coupled spoken words with signs for Koko, while the Gardners did not for Washoe. And thirdly, the strict standards for “calling” each sign as mastered by Washoe might conservatively under-report the number of signs she recognized, while the 1,000 number for Koko could be an exaggeration due to confirmation bias, etc.

One criticism of the work with Washoe is that the very “human” environment that the Gardners used was markedly “unnatural” for a chimpanzee. Washoe wore clothes, used utensils when eating, and even brushed her teeth! However, this criticism completely misses the point of the experiment. The goal was not to see if chimpanzees can learn ASL in the wild (!), but to see if they have the cognitive capacity to learn and use words and language. (Also, it’s worth noting that forks, bedsheets, and toothbrushes are no more “natural” for humans than they are for chimps.)

One of the most haunting aspects of the Washoe story is that she would teach signs to other chimps. Although her two children died while very young, she was seen attempting to teach one of them signs even as he was just an infant. She also taught several signs to another chimp named Loulis. Although Washoe has now died, this was the beginning of a self-perpetuating language system. 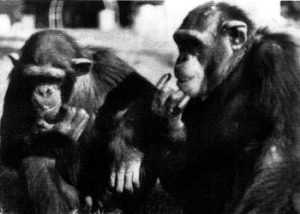 Kanzi the bonobo has also mastered hundreds of words, but he uses a lexigram board instead of sign language. Interestingly, Kanzi was not the intended student of the lexigram training, his adoptive mother Matata was. Kanzi often accompanied Matata to the training sessions. While Matata showed little interest and limited success, Kanzi shocked the researchers by spontaneously going to the board and using ten symbols correctly.

Kanzi is as famous in primatology circles for his spontaneous and dextrous use of tools as he is for his large vocabulary. He can fashion simple stone tools and use them to make other things. He can build a fire, cook eggs into an omelette, and even play Pac-man correctly!

Kanzi was also the source of a haunting story. While in a closed room with no visual contact with his nearby sister, Panbanisha, he was given some yogurt, a favorite food item for him and the other bonobos. He then made some loud vocalizations and Panbanisha, sequestered in another room, excitedly pointed to “yogurt” on the lexigram board. Clearly the screams and screeches of bonobos have a lot more meaning than we know, but had they really created a word for yogurt???

Despite how many words Koko, Washoe, and Kanzi know, they have taught much more than they have learned. Each of them have far surpassed what most primatologists thought they could learn. By showing that other apes are capable of referential communication and lexical mastery, an observation now confirmed by the discovery of gestural communication among apes in the wild, we have key insights into how language evolved in humans.

In addition, this is yet another example of how drastically we have underestimated the cognitive abilities of our fellow apes.