March, April, and May of 2015 have seen a number of very important discoveries in the study of human origins. Here is a quick recap of the studies I found most interest.

In early March, researchers from Arizona State working in Ethiopia found and described a 2.8 million year old jaw bone from a species in the Homo genus, probably H. habilus. This is important because fossils in the Homo lineage from the time period between two and three million years are extremely scarce, making this a “dark period” with many unanswered questions regarding the earliest beginning of Homo. In fact, this jaw bone is now the oldest Homo fossil by more than 400,000 years and shows an interesting mixt of primitive and derived Homo characteristics. 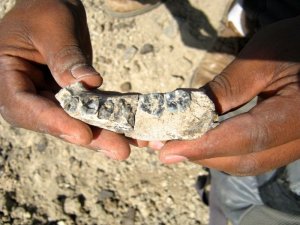 In April, anthropologists studying the spinal columns of humans and their close relatives found the reason why humans have such high rates of back pain and medical problems: incomplete evolution to a bipedal posture. As I’ve written previously, humans evolved from a quadruped posture to a bipedal posture very quickly and because of that, not all of the kinks were properly worked out. In the case of our backs, the discs of cartilage that lubricate our vertebrae are not optimally aligned with the direction of gravity while standing. Because of this, millions of us will suffer from a herniated or “slipped” disc, a condition that is unheard of in other primates. 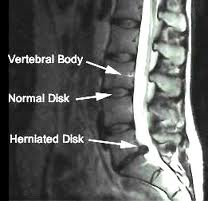 In early May, researchers working in Kenya found some stone tools that were old. Very old, in fact. These simple tools had a heavy/blunt side and a sharp edge on the other side. The sharp edge was probably used as a blade when working with animal skins and the blunt side could have been used for opening nuts or smashing root vegetables. The surprising part is their age – about 3.3 million years old. That’s more than 700,000 years older than the previous oldest-known stone tools. 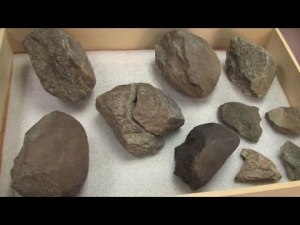 While it’s not certain what species made them – or if that species has even been discovered! – skeletal remains of Kenyanthropus platytops of the same age have been found in the area. K. platytops lived a “mosaic” lifestyle in both open grassland and heavy forest. Although they probably spent time in the trees also, they did walk upright, which would free their hands to make and use stone tools. They might have been the first to do so.

Also in May, geneticists made major progress toward resolving a major question regarding the origin and migration of all non-African peoples: Did fully modern Homo sapiens travel out of sub-saharan Africa by the northern route or the southern route? The norther route means traveling up the western bank of the Red Sea, through Egypt, the Sinai, and into the Levant. The southern route means traveling by boat from modern day Eritrea, Djibouti, or Somalia to modern day Yemen and migrating up through the Arabian dessert along the Red Sea in the west and/or the Arabian Sea and Persian Gulf to the east. 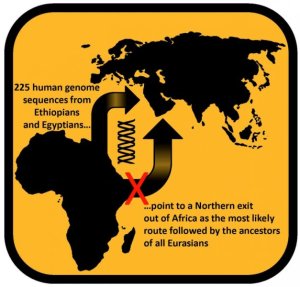 To answer this question, the scientists sequenced whole genomes of people native to three African regions (North, West, and East) and compared them to the genomes of non-African peoples, Eurasians in this case. What they found was that Eurasians diverged from West Africans around 75,000 years ago, from ethnic Ethiopians (east sub-sahara) around 65,000 years ago, and from ethnic Egyptians about 55,000 years ago. This strongly supports the notion that modern humans migrated from eastern tropical Africa along the Northern route through the dessert, Egypt and the Sinai, into the Middle East, and beyond.

Finally, just yesterday, researchers studying a jaw bone discovered four years ago in Ethiopia announced that it may be an altogether new species. They named it Australopithecus deyiremeda. This species is a close relative of Australopithecus afarensis, the species that includes the most famous human ancestor, Lucy, and was found just 22 miles from where Lucy was. Although not all scientists are convinced that this really is a distinct species (instead of just diversity within the afarensis species), many others agree that it is. 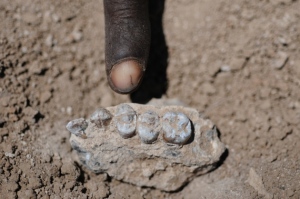 Part of the reason that A. deyiremeda is so controversial is because, if it really is distinct from afarensis, these two species would have existed in the same time and place. This means that many of the fossils currently classified as afarensis may actually be deyiremeda. If true, this could substantially rewrite the history of the Australopithecus genus.

What an exciting time for the world of human evolution research!

One thought on “A Big Few Months for Human Evolution Research”