[This is an adapted excerpt from my book, taken from chapter 10: The Richness of Animal Communication.]

Facial expressions are a unique feature of mammals. No other group of animals has anywhere near the capability that mammals have to shape and contort our faces.

In fact, mammalian facial muscles are quite peculiar as muscles go. Normally, muscles are attached to two different bones on either end and then draw those bones together when the muscle shortens during contraction. Facial muscles are weird because they attach to bone on one end and then soft tissue on the other. They don’t move bones around; instead they pull, scrunch, and squish the skin of our faces. And why? To communicate, of course.

Although they were not the original function of facial muscles, facial expressions almost certainly evolved quickly thereafter, given how universal they are among mammals. As discussed in my book, most mammals have just a few basic expressions. However, the diversity and complexity of facial expression really explodes in the primate lineage and, like most other forms of communication, makes another great leap in complexity in humans.

None of this diversity, however, would have been possible if earlier mammals hadn’t already invented the concept of facial expression. Just like the first automobiles were not Porsches, the first facial expressions were quite simple in comparison with our impressive modern array. However, keep in mind that, while simple and clunky, the first automobiles were much closer to Porsches than they were to horses.

In 2010, researchers in Montréal discovered that mice display a characteristic facial expression when they are in pain. By using mildly painful stimuli and recording with high-speed video cameras, the researchers were able to document and code five facial movements that were almost always elicited when the mice were in pain. The mice close their eyes and scrunch the skin around their eyes. Their nose and cheeks bulge outward and backward (toward the eyes), their ears move backward, and their whiskers twitch.

I was struck by how similar the mouse facial response to pain is to the human one. When you factor in the shape differences in mouse and human faces, the mouse response to pain is almost exactly the same as ours. When in pain, we squint. The muscles in our cheeks ball up, and while we don’t have whiskers, we do usually scrunch up our noses. 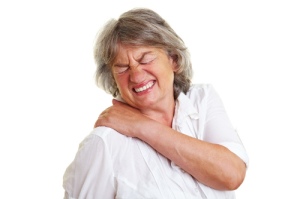 We are separated from mice by about seventy-five million years of evolution, and yet, we make the same face when we’re in pain. (If you are wondering why these experiments were done, the research group studies pain and is searching for therapies for human sufferers of chronic pain conditions. These scientists are not sadists. Quite the opposite, in fact.)

Since then, the pain grimace has also been discovered in rats and is basically the same as in mice. Pain responses have also been found in rabbits, lambs, horses, pigs, and rhesus macaques. It seems that many mammals exhibit the same pain grimace. This grimace is inborn, not learned. (To be sure of that, the study with mice was done with infants.)

The question remains, why do we have an involuntary behavioral program that causes us to wince when we are in pain?

Does the grimace somehow mitigate the pain, like when we rub our head after bumping it? It doesn’t appear to.

Could the grimace offer some strategy to avoid the painful stimulus? I can’t see how.

Is it just an accidental by-product of neurons that are spontaneously activated by the incoming impulses relaying the pain stimulus? Nope—the sensory perception of pain and the motor activation of facial nerves are housed in totally different parts of the brain and carried by different nerves.

The only purpose that has been suggested for the pain grimace is that of communication. By grimacing, an animal is actually giving a signal to fellow conspecifics. Watch out! This thing hurts!

Assuming that the message is received, this communication has great value for the species because something that is painful is also usually dangerous. In fact, that is how and why pain evolved in the first place, as a means to train animals to avoid things that can cause injury or death. (Pain also immobilizes us after an injury to allow healing.) In nature, pain equals danger, so it stands to reason that social-cooperative animals would evolve a mechanism to communicate pain as a means to signal potential danger. Because we’ve only just discovered the pain grimace, the communication-of-danger hypothesis has yet to be tested definitively. It also may hinge on group-selective forces, which are dubious in evolutionary theory.

However, a different communicative function of the pain grimace has already been proposed and more or less proven. By grimacing, infants communicate their discomfort to their mothers or other caregivers. This is akin to crying but more subtle. In humans, we interpret babies’ signs of distress and pain using logic and common sense, but animals have been able to understand and meet the needs of their young long before us. Perhaps the pain grimace plays a role in that. Interestingly, suckling has been shown to relieve pain in infants, even when the pain has nothing to do with hunger per se.

All of this discussion of the communication of an internal sensory state (pain) to others around us raises the issue of empathy. It is plausible that the pain grimace evolved as a means that we mammals use to communicate with our providers, even before we have developed the motor control to do much else. This possibility has already been raised and demonstrated in humans.8,9

The discovery of the pain grimace in many other mammals only emphasizes the likelihood that empathy and emotional communication long predate humanity and were refined over many millions of years of evolution. As discussed in chapter 3 of my book, empathy and communication are almost certainly intertwined because empathy is communication.