The team excavating the fossils from the rising star cave system in South Africa is at it again. Lee Berger, John Hawks, and their master excavators and “underground astronauts” are busy excavating more extensively in the Lesedi and Dinaledi chambers that yielded such amazing finds last year.

(You can read my earlier articles about those two discoveries and their profound implications, here and here. I also wrote an article about how the discovery of H. naledi has made the need to revise the Homo genus even more apparent.)

Most amazing of all for those of us following closely, Berger and Hawks are practically live-streaming their excavations! Even for a team already well known for their commitment to open-access publishing, making fossils quickly available to all, and the general democratization of science, this is an unprecedented degree of public access to their work! Up until now, the painstaking work of paleoanthropology was shrouded in mystery and the curiosity of the general public was satisfied only by the exciting accounts of the intrepid scientists back from their field work, often years later when the fossils were fully analyzed and “ready” for public presentation.

Not anymore. Sponsored by the explorers program of National Geographic, Berger and Hawks are holding daily Facebook Livestream events throughout this three week excavation effort, which you can watch here. Anyone with an internet connection can now receive daily updates of the work of the excavation team and even see live feeds of the recovery of fossils. The team is going to be having a live discussion with middle-schoolers in Dallas thanks to master evolution teacher John Mead.

Oh, and just as I am writing this, John Hawks tweeted the discovery of a new fossil, just seconds after it was found! 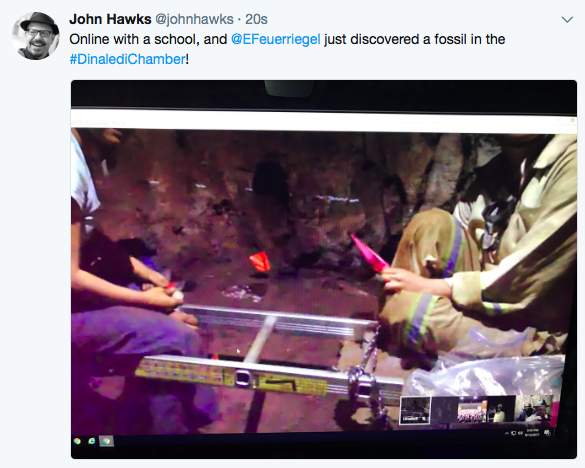 Does it get any more open-access that?!

I was chatting with Berger on Twitter about getting him in my podcast studio sometime soon and he said, “Do you wanna Skype right now?” Um, yeah! So here is the quick conversation we had!

A live Skype call with paleoanthropologists at work within a cave system full of hominin fossils as they are being excavated at that very moment from the “cradle of humanity” in South Africa. What a time to be alive!

2 thoughts on “Video: An Impromptu Skype Call with Lee Berger and John Hawks from inside the Rising Star Caves as They Excavated More Homo naledi Fossils”